PinFlower is a simple puzzle game for Ludum Dare 46. I only finished a handful of levels! ah well. I had to end a day early because of work.

Every move you lose a petal. If you lose them all, you fail. Small water drops set your petals at 3, while big ones set it at 5. The pinwheel is the goal (The flower loves the pinwheel).

A bee will move you to where the other bee is.

--- Credits ---
Super big thanks to my friend Dyani for helping out with the art assets.

If you think this is a neat mechanic, go play Warlock's Tower. It's great! . While I have played and thoroughly enjoyed that game, I promise i didn't take that mechanic purpose. If you saw how haphazard and experimental my workflow was, you would agree I couldn't have arrived at any mechanic on purpose.

I landed on it from playing with graphics. It was animating the petals fall off and fade away that forced me to settle on final mechanic in the game: "Whatever I end up doing, it has to use that".

I wouldn't really say this was a success overall, by my personal standards. I really feel I could have done better. Maybe I'm just annoyed that I lost time for dumb reasons and not learning-opportunity reasons. I'm happy to spend 10 hours on a bug so long as I've learned something after those 10 hours. My hiccups on this project were just dumb or frustrating. Like making Unity's UI crash consistently, somehow. Too much code written by different other people.

I still had a lot of fun on this one. Spending Sunday morning listening to a million bee sounds and editing one to be just how I wanted it was worth all the pain, plus working with someone else who made the art and then animating those designs? *chefs kiss*.

Next time I would have stuck with my own grid system. Any time I thought I gained by using a "complete" solution was lost in the time spent to understanding/working with the unfamiliar. That said, the first night I thought I was basically done with the programming after just a few hours. What optimism! I was singing a different tune then, for sure.

My biggest takeaway is to implement and code my systems in such a way that I can design levels and iterate on those as I go more easily. Get those foundations early and make them as modular as possible. If I am going to have something that requires a lot of iteration (which is basically every part of game and level design), I should give myself as much time as possible to do it.

Ludum Dare is fun, and I can't wait to do it again! 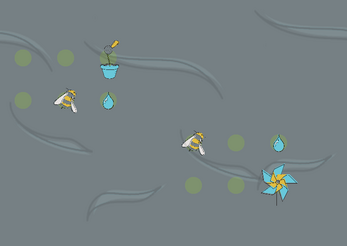 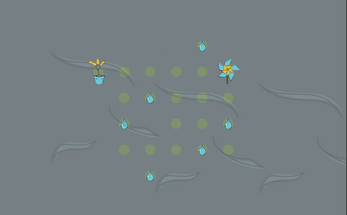 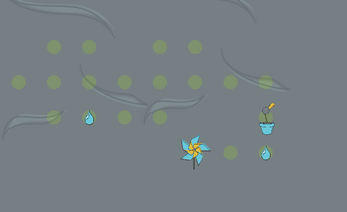