Alpha prototype of the dice dungeon game. Lots of obvious ToDo's, and it's not balanced well at all. I need some feedback.

I'm working on other things in the time being, so I'm putting this up as-is. Probably won't come back to it? Maybe?

Most of the awesome placeholder art is by Rvros.

Next step with mechanics, is to add enemies with strengths and weaknesses to particular types of attacks (magic, swords, arrows, punching, do different damage to different enemies). Also, the player leveling system needs to be figured out.

Major hurtle is that I want to redo the UI entirely, and I am considering mobile as a final platform. Not sure about any of that.

Refresh for new dungeons/game. No way to do it from in the game rn.

To go to a fight, go to the map screen. Click on adjacent dungeon rooms until you select one with an enemy. To fight, select moves on the right then click "take turn".  Selecting dice puts them in a "hold" zone.

After each fight you go back to the menu where you can spend gold on dice, select which dice you want to use in battle, and buy upgrades.

I am not sure if the game can be beaten right now, since the player upgrade system doesn't work, but the enemy upgrade/level system does.

Some things I know I want to do, if I continue the project 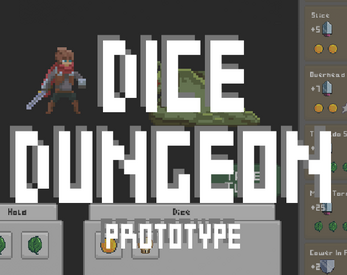